Arlesey Town I first came to Arlesey in 2008 after spending what seems most of my life in non-league football starting in (I think) 1972 at Dunstable Town, my local club at the time. I’ve always worked behind the scenes selling programmes, working the gates and working on the pitch etc., those were great days for a young lad with Barry Fry as manager and players like George Best (briefly) and Jeff Astle in the side. That came to an end in 1994 when Dunstable folded completely after several years of struggle and name changes and the loss through old age of most of the END_OF_DOCUMENT_TOKEN_TO_BE_REPLACED

Thames Valley Youth Thames Valley Youth FC is a fine example of a friendly, pro-active youth football club that plays an important role in their local community. Football Focus Magazine recently caught up with Club Representative Dwayne Mackenzie to find out more about the good work they’ve been doing lately. Involvement He told us, “I personally have been involved with club since July 2017. I was meant to have a year out and take a break from grassroots football after being involved in either assistant or management roles since I was 16 and I’m now 33. My intention was to take under 6s only. I have END_OF_DOCUMENT_TOKEN_TO_BE_REPLACED

Pentraeth Pentraeth FC has been working hard during the off-season in order to make sure that they are well prepared for the new campaign. Football Focus Magazine recently caught up with First Team Manager Mathew Parry to find out more, Involvement He told us, “I took over as manager of the club midway through the 2012/13 season when the manager at the time left his position. I had been playing for the club for a couple of years but had close ties from when I was young from watching my village side on a Sunday morning and Saturday afternoon.” The Role “I think everyone who is END_OF_DOCUMENT_TOKEN_TO_BE_REPLACED

Goole It is an exciting time for everyone currently involved with Goole AFC at the moment with plans in place to help the club progress both on and off the field. Football Focus Magazine recently caught up with their Chairman Alan Wilson to find out more. Involvement He told us, “I’ve been a supporter of the club for about seven years, having been attracted to it because it was my local club. At the end of the 17-18 season the Chairman and Vice Chairman (the main shareholders) stood down. In order to move the club forward, the supporters formed a cooperative. I was elected Chairman. Shortly END_OF_DOCUMENT_TOKEN_TO_BE_REPLACED

Scarborough Athletic Scarborough Athletic FC enjoyed a successful season last time around which ended in them clinching promotion. Football Focus Magazine recently caught up with Club Representative Andrew Davies ahead of the new campaign. Atmosphere He told us, “The mood around the place is very positive at the moment, helped by our promotion to the Evo-Stik Premier Division last season. It is the first time we will have played at this level since the club was formed in 2007, so everyone is counting down the days until we travel to Hednesford Town for our opening game. Until last season we had spent ten years playing our END_OF_DOCUMENT_TOKEN_TO_BE_REPLACED

Culcheth Athletic Culcheth Athletic FC plays a vital role in their local community, providing young players with a safe and enjoyable environment in which to play the game. Football Focus magazine recently caught up with their Chairman Phil Gaskell to find out more about the good work that they’ve been doing lately. Involvement He told us, “I’ve been Chairman of the club now for five years. My eldest child started with the Academy seven years ago; he’s now going to U12’s next season. I’m the sort of person that likes to roll my sleeves up and get involved. When the Chairman position became available I END_OF_DOCUMENT_TOKEN_TO_BE_REPLACED 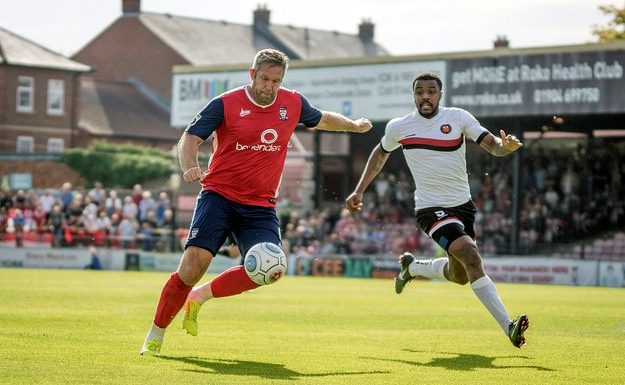 It is an exciting time for York City FC as they move closer to a move to their new stadium. Football Focus Magazine recently caught up with their Sporting Director Dave Penney to find out more. Dave joined the club alongside first team manager Martin Gray on October 2, 2017. He was promoted to the club’s board of directors in March 2018 and is now in charge of the day-to-day running of the club. Atmosphere He told us, “Everyone is optimistic about the coming season. There is a feel-good factor around the club. The players came back on June 27. We have a lot to END_OF_DOCUMENT_TOKEN_TO_BE_REPLACED